A programmable keyboard is nothing without a powerful configurator and firmware. That's why we've been working for over a year to completely overhaul Bazecor, the configurator software for the Dygma keyboards. And finally, it's here!

Check out our video or continue reading:

New users will find it easier to navigate thanks to the structured approach of the standard view, which has a specific section for different types of functions. It also has descriptions and tooltips that explain what everything does 👁️‍🗨️

Advanced users will also appreciate the new single view. With every function one or two clicks away, you can make changes to your layouts faster than ever 🏎️

We've also made some functions easier to access. For example, the macro is not hidden in the layout editor anymore. Now, it has its own section.

Creating and editing macros can be confusing 🤨, that's why we wanted to ensure that the UI equally served both new and experienced users.

We added a macro recorder to make the process lighting-fast, a timeline editor to make changes easily, and a random delay option to expand the possibilities 🔀

We doubled the memory space for macros and removed the arbitrary limit of 64 macros. Now you have a memory indicator of how much space you're using 🧠

This memory is shared with the Superkeys, which is one of the most significant new features of Bazecor 1.0.0

Superkeys, also known as Tap Dance in other configurator programs, allow up to 5 different functions in a single key.

For example, you could have a Super-media-key where:

Superkeys open a world of possibilities, and we're very excited for you to explore them.

However, this feature is still in development. For example, you can assign Layer Lock to a Superkey but not Layer Switch. And there are still a few bugs to be polished.

Let's face it. Our previous firmware update process was a pain to use. The instructions were vague, and it failed too many times ☠️

The new process is seamless, with fewer steps, visual cues, and a firmware update progress bar 🍃

With this new feature, every time you update the firmware or save your layouts, macros, or preferences, a new backup of your whole keyboard's configuration is saved to your hard drive.

To restore a backup, go to Preferences > Restore and select the backup file. You can also change the folder where the backups are stored 📁

In this revamped preferences section, you can now select the language for your keyboard and the appearance of Bazecor.

You can switch between System, Dark, or Light 🔆

Our big challenge ahead is to make the Superkeys work flawlessly. However, the latest Kaleidoscope release (the firmware that our keyboards use) has completely changed how they work, so we have to redo them from the ground up.

That we’ll be our big focus for the next releases ➡️

Beta 15 features a fully implemented UI/UX, a new macro editor, and much more.

I must say, it looks stunning 👀 pic.twitter.com/9SBBKM8Ldq

We’ve implemented a bunch of visual upgrades that’ll help lower the learning curve for new users and improve speed for already established ones. We updated the keyboard graphics to be in line with the rest of the UI and accurately represent our keyboards and functions.

We now have two views available:

We’ve also added new power buttons that’ll allow you to put your computer to sleep 💤 or shutdown 🅾️ at the touch of a key.

On top of that, you can now view the content of your macros and superkeys in the layout editor.

We’ll continue updating our keyboards with languages to make our products accessible to all. So… which should we do next?

Creating macros can be confusing 🤨, so we wanted to ensure that the UI equally served new and experienced users. We added a macro recorder to make the process lighting fast, a timeline editor to easily make changes, and a random delay option to expand the possibilities. Lastly, we updated the macro limit from 64 to 128 to give you more room to play with.

Much like the layout editor, we’ve added a new standard view to the Superkey editor to improve the experience and speed of creating superkeys. We also upped the max saved superkeys to 128.

This patch was largely about improving the user experience, intuitiveness, and flow of the software. The next update will focus on merging our firmware with the latest Kaleidoscope update, which should help squash all the bugs related to Superkeys and also those regarding connectivity –and as always, a bunch of extra features to improve your workflow. 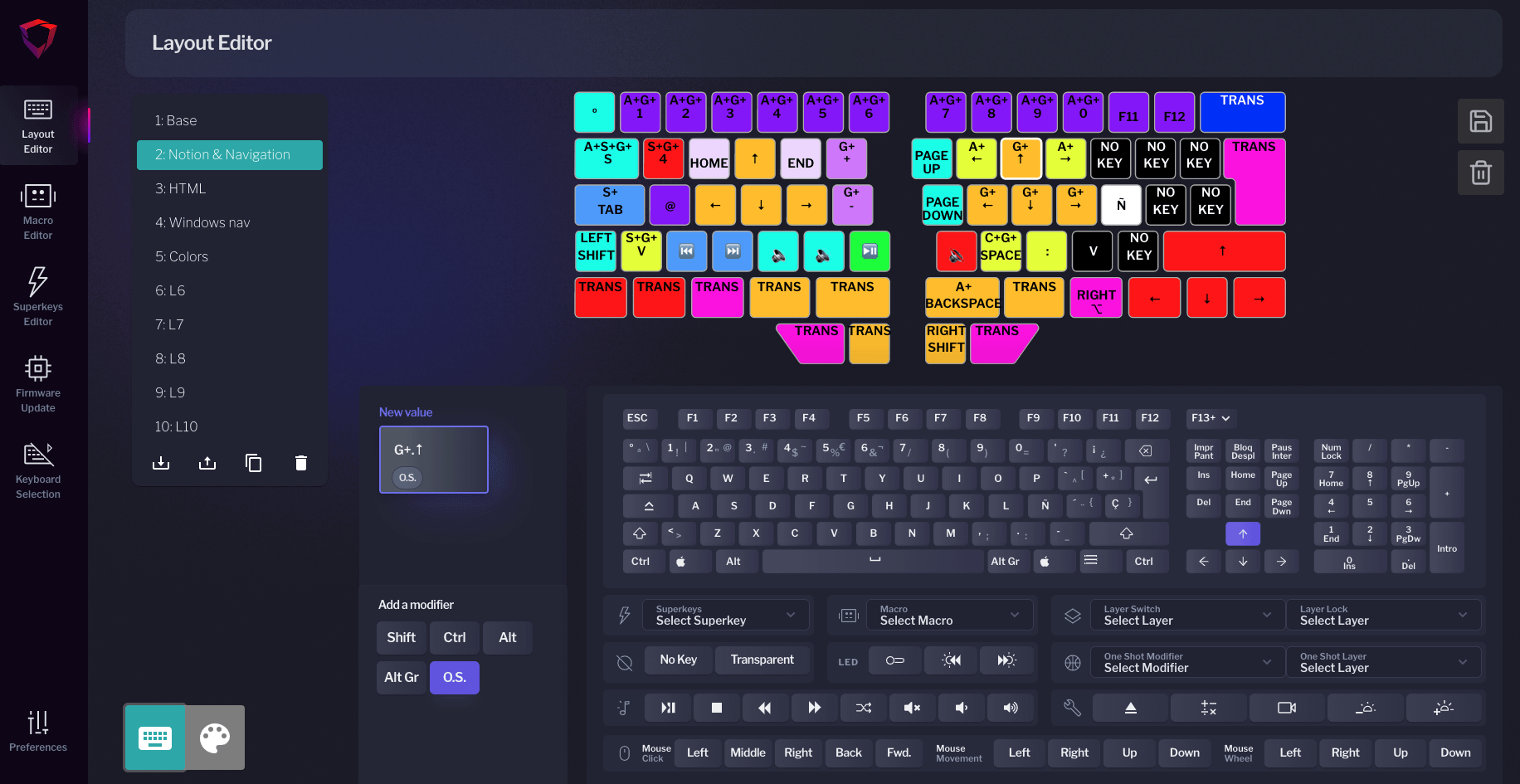 We have started implementing the UX & UI to the new look & feel, which we believe is much better looking and intuitive than the previous one.

It’s still a work in progress -at first glance, you’ll notice that the keyboard representation is still the old one- as we’ve only upgraded the UX of some screens and the overall styling.

More keys in the keyboard picker 🔆

We’ve added some extra key functions in the keyboard picker that you might find useful:

We’ve changed the way we name the firmware, so it’s independent and more distinguishable from the software version.

That way, we don’t need to release a new firmware version with every software version -thus avoiding unnecessary firmware updates. 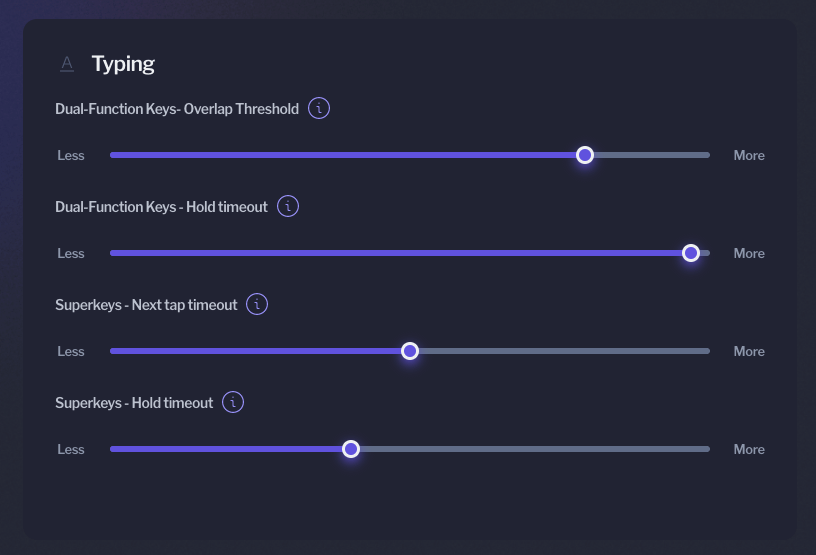 You can now configure Dual-Function keys and Superkeys independently in the preference menu. We tried combining the two for a more straightforward and intuitive UX, but that led to undesired bugs.

We have also updated the tooltips, so it’s easier to understand how each value affects the behavior of the keys.

We have entirely changed the firmware update process in the background. Now it should always work when the Raise is connected directly to the computer.

Many, many Superkey's bugs gone ☠️

Some bugs we are still fighting 🤺

Our Dygmate Cacus has developed a feature for the Raise FW Focus API that enables the option to trigger color changes on the underglow, which we have included in this beta.

He has even started developing a project to trigger these LED effects from events generated on his computer. Another Dygmate, Massimiliano, has also been working on a library to call events on the Raise through this API.

This way, the underglow of the Raise could change when you receive a notification, or when your mic is muted in a meeting, or whatever you can imagine configuring.

These projects are at very early stages, but you can check them here:

Thanks to both of them for their contributions! It's great to see the community so involved in the development of new features.

Dual-Function keys are back! 🎉

One of the main features of Bazecor 1.0.0 is Superkeys, which substitute Dual-Function keys and offer extra functionalities.

However, Superkeys can't exactly recreate how Dual-Function keys behave, so all this time there has been a "functionality void" between BZ 1.0.0 and 0.3.3. To tackle many of the Superkeys bugs (like the one where duplicating a layer with Superkeys would "break" them) we've created a Superkeys editor in a new tab. Now they are configured in a very similar way as the Macros.

Simplified and improved keyboard menu in the Layout Editor ⌨️

We've improved the UX & UI of the keyboard menu so it's faster and more intuitive to use. Other bugs fixes and improvements 💫

Thanks for your support, and we'll be back soon with a new beta! 💪

Now you can make pull requests in Github for the beta 🛠️ 🧑‍💻 🎆

We've merged the beta code with the main branch in Github.

This means you can help us by making pull requests in Github, and we will evaluate and merge them, just like many of you have been doing with 0.3.3 and previous versions of Bazecor.

We really appreciate your contributions! Together, we can make Bazecor as awesome as we can imagine 💪

Special thanks to GazHank, pabrams, and AriPerkkio for their latest contributions, some of which we have incorporated in this beta and others are still pending 🤗

Improvements to the UI & UX 🖌️

Improvements and fixes in the Preferences menu 🎨:

In Beta 8, we revamped the preferences menu, but we're still working on it and tweaking the design. We are working hard to release a new beta twice a week, so don't forget to come back to see what's new. We're working on new features and improvements!

We have completely revamped the preferences menu, setting the look & feel for future improvements in other screens of Bazecor.

It's still a work in progress, so any extra feedback would be really appreciated.👍

There are still other bugs to squash, and we are working on more improvements. As soon as most bugs and features are released, we'll focus on the UI.

In this update, we've focused on fixing many small bugs that you've been reporting and a few extra improvements along the way.